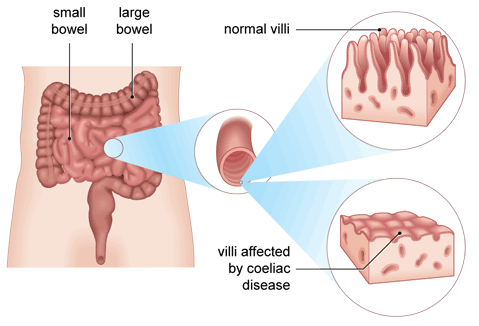 Coeliac disease is a condition in which the immune system responds abnormally to a protein called gluten, which then leads to damage to the lining of the small intestine. Gluten is found in wheat, rye, barley, and a multitude of prepared foods. Damage to the lining of the small intestines can lead to difficulty absorbing important nutrients (malabsorption). The reason for developing coeliac disease is not clear but you can think of it as being intolerant to allergens in certain foods. Avoiding gluten usually stops the damage to the intestinal lining and the malabsorption that results. If mild, patients may have no symptoms and may have detected an abnormality on blood tests such as low iron, low blood count, or vitamin D deficiency.

We diagnose coeliac disease on blood test (IgA tissue transglutaminase) and on small bowel biopsies during endoscopy - don't worry the biopsies are painless. The pathologist uses a microscope to examine the biopsy to determine whether the small intestine lining appears flattened indicating a suspicion of coeliac disease.

Treatment for celiac disease is complete elimination of gluten from the diet for life. You need to be very strict with a gluten free diet. Gluten is the group of proteins found in wheat, rye, and barley that are toxic to those with celiac disease. Gluten is not only contained in these most commonly consumed grains in the Western world, but is also hidden as an ingredient in a large number of prepared foods as well as medications and supplements. Strict gluten avoidance is recommended since even small amounts can aggravate the disease.